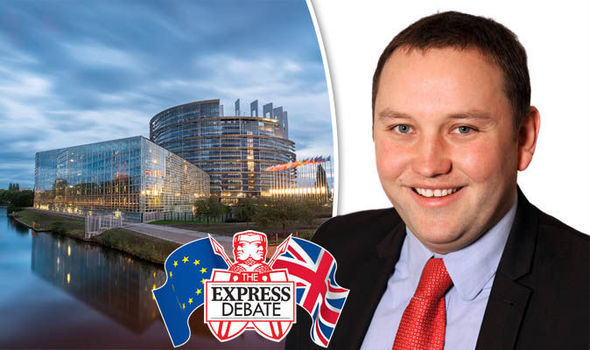 I wrote in the Daily Express to make the case for our continued membership of the European Union. You can read the full article here.

After Scotland’s referendum decision to remain, I was hoping for a break from high stakes decisions about the future of our country. But here we are again, having to make the argument about why it is best to work together with our neighbours and allies for the betterment of the country.

Let’s get one thing out of the way first. This is a debate about jobs, prosperity and the future of our economy. And on all three counts, we are better off in the EU. That’s why the Labour Party have been united and consistent in our support for the EU -; and we’re not the only ones.

Respected bodies like the International Monetary Fund and the Institute for Fiscal Studies say we are better off in the EU. So does Barack Obama, and Gordon Brown -; who rightly kept the UK out of the Euro and protected Britain’s right to a border with the rest of Europe.

The UK Government also support Remain. This week the Treasury published an analysis detailing the immediate economic impact of leaving the EU, which concluded that a vote to leave would create “instability and uncertainty” in the UK economy.

However, while the Chancellor and his Treasury are making the case to remain, other Government ministers and members of the Conservative party certainly aren’t. The Brexit debate is tearing the Tories apart.

Recently, Prime Minister David Cameron labelled comments made by his own Defence Minister “absolutely wrong” and “very misleading”, after she claimed that the UK did not have a veto on Turkish ascension to the EU. We do. Meanwhile, claims made by Boris Johnson have ranged from the shrill to the hysterical.

Recently, he told everyone that the NHS would be better off if we left the EU. But that was swiftly contradicted by Simon Stephens, the NHS Chief Executive, who said that that the economic impact of Brexit would result in a reduction of funding for the NHS.

It appears the Brexit campaign have taken in the mantle that facts don’t matter if you can make people believe. Of course, we know that for Boris Johnson this isn’t about whether or not we are in the EU. It’s about ensuring he is in pole position to succeed Cameron as Prime Minister.

And Boris is not the only one who is placing his own interests above those of the country. The referendum wouldn’t even be happening if David Cameron hadn’t felt the need to appease his backbenchers, many of whom have built their careers on euro-scepticism.

Angela Eagle summed it up at this week’s Prime Minister’s Questions: this is a Government in chaos and at war with itself, adrift and at the mercy of its own rebel backbenchers. And the Tories’ civil war over the EU is not restricted to Westminster.

Rather than emphasising the social and economic benefits of the EU, she has criticised the Remain campaign and argued that should Scotland vote to stay, and the rest of the UK vote to leave, this would be sufficient grounds for another independence referendum.

In Scotland, freshly elected Tory MSPs are declaring for the Leave campaign, in defiance of their own leader, Ruth Davidson. As for the SNP, although Nicola Sturgeon has urged everyone else to make the positive case to remain in the EU, she seems unable to take her own advice.

I don’t see that as particularly helpful. Indeed, one could argue she is gambling with our future in order to create a trigger for a second Scottish Independence referendum. Why is there no formal SNP “IN” campaign when every other party had a campaign?

There are so many positive arguments in favour of remaining in the EU. Why doesn’t Scotland’s First Minister focus on those? Three million British jobs linked to our trade with the EU. Export sales to the EU worth £220 billion a year to the UK economy. A total of £24billion of annual investment in the UK from other EU countries, the equivalent of £66million per day.

For months, it has been left to Labour to make these positive arguments and rally the troops for the Remain campaign. But now that we are entering the closing stages, everyone needs to pitch in to convince the country that it is in our best interests to stay.

We know the EU is not perfect, and I tend to agree with Gordon Brown, who has argued that we need “stronger measures at the European level” to protect workers “undercut by exploitative employers in other European countries or operating underground in the UK” and that the UK should once again be leading in the EU rather than leaving.

Over the coming weeks, Labour will continue to make the positive argument for remaining within the EU, in order to retain valuable trade links and to support jobs and our economy.Yes, being in the EU means we cede a little Sovereignty. But we gain so much more in return.

That’s what working together in partnership as a family of nations means. Long term peace and prosperity is worth fighting for.