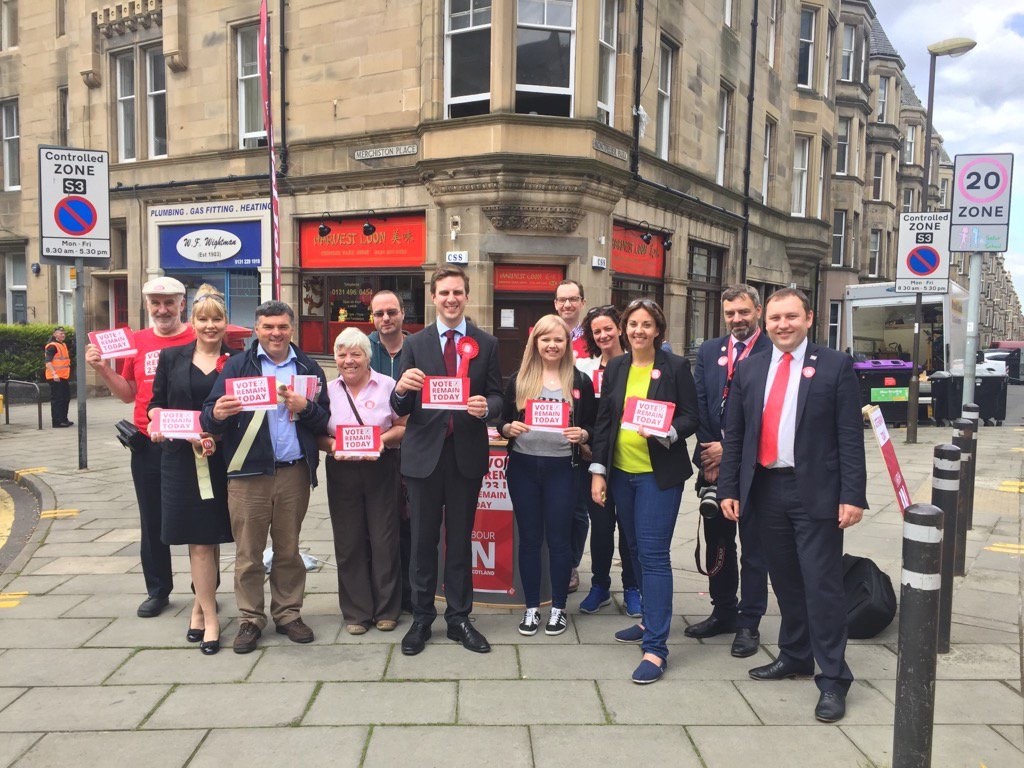 I have received thousands of concerned emails, letters and calls from constituents in the wake of the referendum vote to leave the European Union.•I have one of the busiest constituency offices in the country and this issue has resulted in more correspondence from constituents than any other. Here are my thoughts on the vote and its implications:•

The result of the referendum is, in my view, a disaster for the UK and Scotland. •It has created significant uncertainty and been built on weak argument that the Leave camp are now rowing back from significantly.•

In Scotland, 62% of voters were in favour of remaining in the EU, with all Scotland’s local authority areas having a majority in favour of remaining. In this constituency of Edinburgh South, 78% of constituents voted to remain in the EU. •That is a significant voice.•I think this high figure is, in no small part, due to the contribution the EU makes to the higher education Research and Development (R&D) sector and the considerable financial services sector in Edinburgh. •There is also the large body of small exporting businesses that rely on exporting through barrier free access to the EU and the•bilateral•access the EU has with other countries. I asked the Prime Minister directly about these Edinburgh concerns at his statement last•Monday•https://www.facebook.com/IanMurrayMP/videos/1029911170459357/•

I have written an opinion piece for today’s Edinburgh Evening News that briefly touches on some of the issues. You can read this here•http://www.edinburghnews.scotsman.com/news/opinion/ian-murray-we-must-pause-until-the-brexit-picture-gets-clearer-1-4168673.

Many have asked for there to be a second referendum or for parliament to vote down the process for starting exit negotiations. •

The process of any country leaving the EU has never been initiated before so the pathway is unclear. The Treaty rules say that it will take up to two years and that will commence when the UK Member State triggers Article 50. •

I asked the House of Commons Library for an overview of Article 50 and this was their response: (there is a much fuller briefing here•CBP-7551.pdf):•

The UK would negotiate the terms of its withdrawal with the UK negotiator (probably the Commission) and would continue to participate in EU activities and decision making during the negotiation period, but would not take part or vote in any Council or European Council discussion concerning its withdrawal. The negotiation period is two years but can be extended subject to agreement from all member states.

There is no need to give immediate notice of withdrawal under Article 50 TEU, and the outgoing Prime Minster, David Cameron, has said he will not lead the exit negotiations, which means that notification will not be given until after 2 September, when the new Conservative Party Leader (and hence Prime Minister) is due to be appointed. There has been some discussion of whether a vote in Parliament is necessary to ratify the decision to leave and allow the Government to notify the European Commission and trigger Article 50. However, while the constitutional position is unclear and there is no apparent precedent, prevailing opinion at this moment is that the withdrawal process is a matter simply for Government -; a question of Royal prerogative -; not Parliament.

Other potential avenues for withdrawal have been mooted; however, the Prime Minister said in his statement on 21 February 2016 that

“if the British people vote to leave, there is only one way to bring that about, namely to trigger Article 50 of the Treaties and begin the process of exit•”

The House of Commons Library is currently undertaking further research into the process of UK withdrawal under Article 50 and I will endeavour to update you as and when new information comes available.”

Many have asked if•I would vote against the initiation of Article 50. However, it is unlikely there would be a vote. There•is no explicit requirement in the UK’s constitutional arrangements for parliamentary approval of a decision to notify the EU.••This would normally be executed by the head of government, exercising prerogative powers.••But there may be a political case for a non-binding confirmatory resolution to be agreed by the House of Commons. This was an advisory referendum but the Government always said it would implement the•”will of the people” regardless of the result. •

If that is the case I would give serous consideration to voting against Article 50, particularly given the strength of feeling in South Edinburgh and the economic impact that may occur over the coming months and years. I do absolutely recognise that a democratic vote has taken place and a majority voted to Leave the EU. As a democrat, I fully respect and recognise the result. An alternative approach may be a second referendum to approve the deal that is negotiated for exit. At this stage, with so little clarity, all options should be kept on the table, especially given the potential consequences of exit from the EU.

It is clear, however, that the basis for the narrative around leaving the EU was an extra £350m a week into the NHS and the halting of EU immigration. •We all know that these were farcical arguments that have now been dismissed by the leave camp themselves. • I also think the leave camp portraying the warnings of the economic, social and political consequences as “scaremongering” now need to look at the reality of what has happened. •Trade, cost of living, pensions, mortgages & construction are already being affected by the fall in the value of the pound & the UK’s credit rating. •As the cost of borrowing rises for Government there is less money available for public services and that has a knock-on effect elsewhere. •

It is clear that the leave camp have nothing to offer and didn’t expect to be in this position. •Again, they have failed to come up with any proposals about what the UKs position will be with regards to the EU now. •What I have been clear about for some time is that if they negotiate a “Norway” model, or a simple access to the single market, that will mean compliance with all the current EU regulatory framework, the acceptance of the free movement of people and the fee. •That essentially means the UK would pay, obey but have no say in their relationship with the EU. •Flying in the face of the empty “leave” promises.

All in all, there is no doubt that the Prime Minister gambled with our membership of the EU in order to heel deep rooted, generational, divisions within his own party. •He has lost and the consequences are grave.•

There could certainly be a 2nd referendum on the exit deal that is negotiated and that could explicitly allow for the question to be put that we stay in the EU or back the negotiated settlement. •That would give clarity to what a leave vote actually looks like and what the alternative to remaining in the EU would be.

Can I just say that EU nationals and immigrants in the UK make an extraordinary contribution to our economy, culture and local communities and you are very, very welcome. •Any concerns about hate crimes should be reported to the police as soon as is possible. I have spoken to local police and they will respond in recognition of the severity of these issues.

We should all have a zero tolerance approach on this issue. •The Leave campaign should be thoroughly ashamed of the genie they have let out of the bottle on this issue. •It must be stopped and stamped out. No ifs, no buts.

Many EU nationals getting in touch and worried about their future (and indeed one or two ex-pats living abroad) need not be concerned for the moment. •There will be no change in the residency, work or study for people either in the UK or UK nationals living abroad. •However, the negotiated settlement with the EU is unknown and it is, therefore, unclear what the long term situation will be. •There was a statement in the House of•Commons on this today and it is worth reading the comments from the Immigration Minister•https://hansard.parliament.uk/commons/2016-07-04/debates/Hocdebdt20160704scrlgtghs_2Curgentquestionod20tieunationalsUkresidence/EUNationalsUKResidence.•

My view, and what•I will fight for, is that it is entirely unacceptable to suggest people who have lived, worked, settled and make a contribution to our community and our country should be asked to leave and it’s disgusting that some Conservative leadership candidates haven’t ruled it out. •Immigration is and has been good for the UK and we must lance this narrative that immigration is bad. •

Some have asked about pensions and, again, we know that these are likely to be protected but the fall in the stock market, the fall in the pound and the volatility of the wider economy will have an impact on pensions. •Again, a full House of Commons briefing paper is here•CBP-7629.pdf.

We will also not allow for the Chancellor to use this uncertainty as an opportunity to slash public services or support to the most vulnerable. •It is right that he has scrapped the proposal for an emergency budget and I think his move today to float the lowering of Corporation Tax is the wrong priority. •Surely he should be diverting resources to capital allowances to encourage investment and into real investment infrastructure that allows the economy to grow. Dropping Corporation Tax, in my view, is at the wrong end of the business chain. •

Perhaps this may be the democratic way to resolve this problem but•I•can’t see how this can be achieved with the Fixed Term Parliaments Act and the•Conservative Leadership candidates saying that they will keep this Parliament until the scheduled 2020 General Election.

There are options being considered and there could be a federalised membership structure for the UK. •We could have a “Norway” model that would allow us to be full participants in the EU but not be covered by the Common Fisheries Policy (which is of great concern to many Scottish communities). •We may not leave the EU at all. •These are just some examples of where we may get to which is why we need to pause and reflect on the current situtation.

A SECOND REFERENDUM ON SCOTTISH INDEPENDENCE

I can appreciate that there will be a move to look at this again and I have argued that this is the wrong time to talk about this as a solution when we are unclear about the relationship the UK will have with the EU and we are unclear about the future. •Both the Scottish Labour Party Leader, Kezia Dugdale MSP, and I have been very clear that we support the First Minister in seeking solutions for Scotland to maintain a beneficial relationship with the EU but we should not rush to any conclusions at the moment and we would not support a 2nd independence referendum.

We would not support a second referendum as the fallout from the EU referendum makes the position very unclear, the case for Scottish independence is much more difficult to make today than it was in 2014. Additionally, the position of Scotland as a country in the EU but not in the UK is also very unclear.

We shouldn’t rush to impose more uncertainty and compound an already difficult situation with another.

If we look at the democratic will of the people of Scotland, they have voted to stay in the UK and the EU so that should be the destination that we should work towards. •Some others are suggesting the destination should be an independent Scotland. •I don’t agree that this approach helps the problem; it merely compounds it.

THE TECHNICAL BIT THAT MAY JUSTIFY A SECOND EU REFERENDUM

For a significant amount of impartial information the House of Commons library has an information hub with all their latest impartial briefings.•http://www.parliament.uk/eu-referendum.•

I will endeavour to keep residents updated on new information and how this important issue unfolds over the coming weeks and months. Please contact me if you wish to receive these updates via email.