NEW QUESTIONS OVER POSTAL SERVICE IN A SEPARATE SCOTLAND

Responding to claims by the UK Government that the Royal Mail would cease to exist in a separate Scotland and that the SNP Government has had no discussions with the Royal Mail, Shadow Postal Affairs Minister Ian Murray MP said:

“The SNP Government’s response to what postal services would look like after separation is quite extraordinary and involves two unsubstantiated assumptions. Firstly, that we will follow the EU Directive on postal services -; but Scotland may not be in the EU and, secondly, that nothing would change. •How can the SNP claim sending post to the rest of the UK would be the same when the service will be being provided by the UK Royal Mail who would be free to charge a commercial rate?

“End to end postal delivery is expensive and the SNP has to do more than just say everything will be the same. Alex Salmond has many questions to answer. What would be the cost of sending letters inside and outside of Scotland? How would the jobs and pensions of Royal Mail staff be secured? And what would happen in areas of rural Scotland that are currently supported by a guaranteed UK wide service. 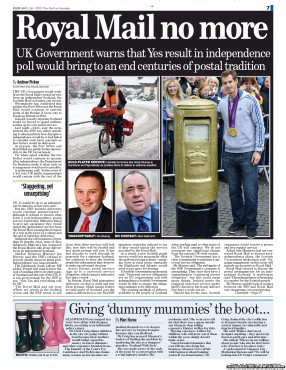