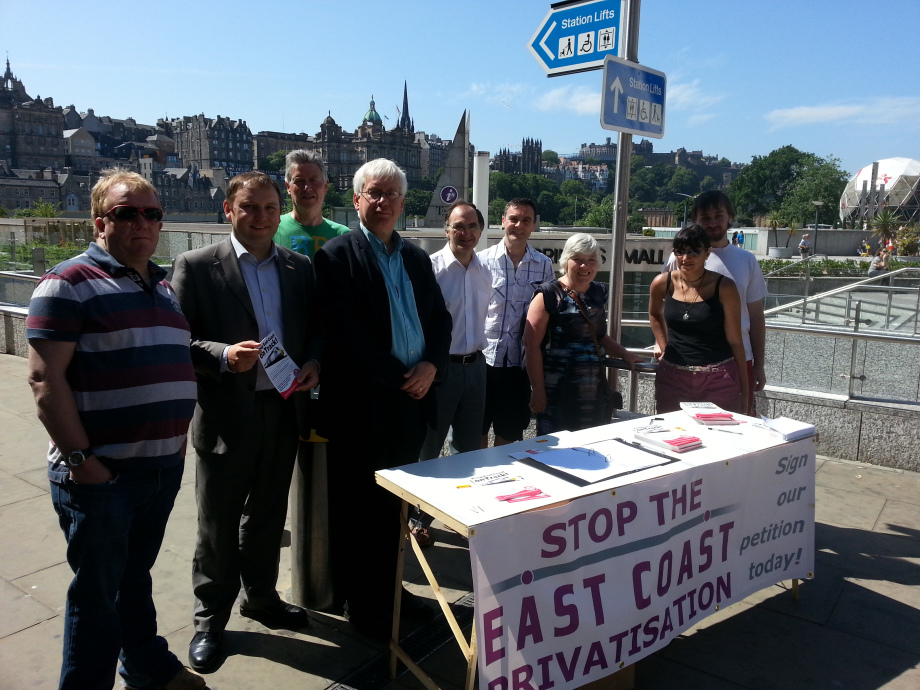 Edinburgh Labour MPs Sheila Gilmore, Mark Lazarowicz and Ian Murray today continued their campaign against the privatisation of East Coast with a visit to Waverley Station.

•While handing out leaflets and speaking to passengers outside the station, the group were joined by members of the public, trade unionists and Councillors, including newly elected Liberton/Gilmerton Councillor Keith Robson. Afterwards the MPs were shown East Coast’s operation at Waverley, where they got the opportunity to speak to East Coast staff about the improvements that have been delivered in recent years.

•‘The East Coast line has performed much better in the public sector than being privately operated. It has returned resources to the public purse and that progress is best continued in public ownership. Travellers and the tax payer deserve nothing less.’

•‘It was good to talk to East Coast staff about the improvements to services that East Coast have made under public ownership over the last four years. When speaking to passengers I also emphasised that at present all profits are retained for public benefit, rather than lost to shareholders.’

•’The decision to privatise East Coast puts this at risk and shows that David Cameron and his Ministers put ideology before the needs of passengers and taxpayers.’

•‘East Coast has achieved success under public operation, receiving less subsidy than any of the other 18 private franchises and paying back more to the taxpayer than all but one.’

•’It has done that with no certainty about how long it would continue to remain in public hands. Ministers should now drop their plans for privatisation to give East Coast stability so it can plan for for the future.’