FROM FRONTBENCH TO LAB BENCH AT THE UNIVERSITY OF EDINBURGH 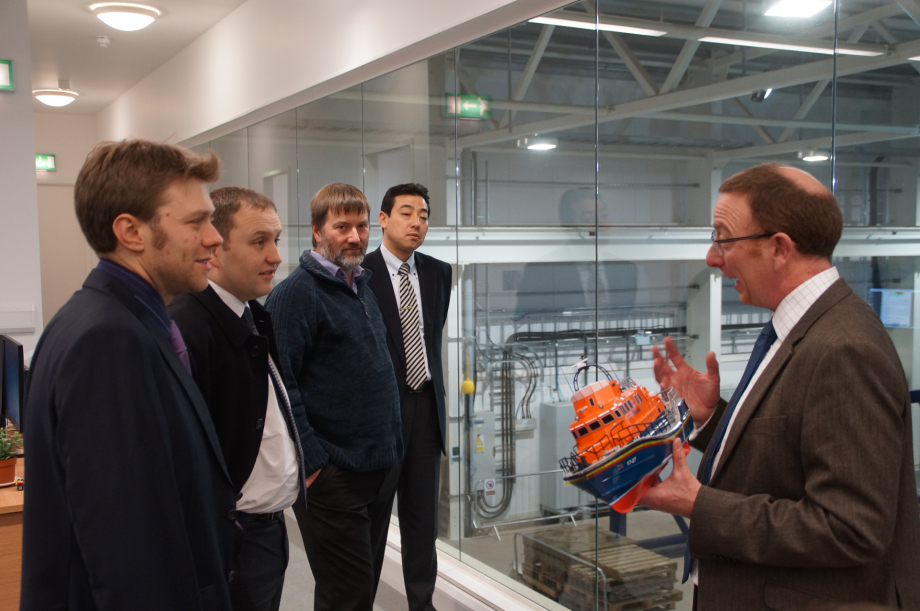 Ian Murray MP swapped legislation for a lab coat, when he visited Dr Stuart Gilfillan at the King’s Buildings campus, University of Edinburgh on the 24th•January as part of a unique ‘pairing’ scheme run by the Royal Society -; the UK national academy of science.

During his visit Ian viewed the internationally leading All-Waters Combined Current and Wave Test Facility with the team at Flowave TT. This 30m diameter and 5m deep circular tank is a unique facility which can be used to test any wave or tidal renewable energy generation system in any combination of current and wave environments.

Ian also toured the state of the art CO2•laboratory at the Grant Institute of the School of GeoSciences, were he spoke to Ms Rachel Kilgallon, a PhD candidate with Dr. Gilfillan, who is investigating how carbon dioxide injected underground can be tracked to ensure it is safely stored.

Finally, Ian was shown the detail of the planned Higgs Centre for Innovation by Prof. Arthur Trew, Head of the School of Physics and Astronomy. The Higgs centre, which is due to open in 2016, will be constructed on the site of the UK Astronomy Technology Centre (ATC) at the Royal Observatory, Edinburgh.

Ian Murray MP said: “It was a privilege visiting the world leading University of Edinburgh King’s Buildings Campus in my constituency.• The work being done there is fascinating and I enjoyed Stuart’s guide through the different facilities; from developing leading wave technology to testing the safe storage of carbon dioxide.• I was also delighted to view the plans for the Higgs Centre for Innovation, which will keep Edinburgh at the forefront of international technology development for years to come.• I’m grateful to all who gave up their time and who organised the visit.”

Dr Stuart Gilfillan has already spent a week in the Houses of Parliament as part of the pairing scheme’s ‘Week in Westminster’. •This provided Stuart with a ‘behind the scenes’ insight into how science policy is formed as well as an understanding of the working life of an MP.

Stuart said: “I thoroughly enjoyed giving Ian a brief insight into the ground-breaking research and education which is being undertaken within his constituency at King’s Buildings. It was a pleasure to return the hospitality he showed whilst I was shadowing him at Westminster and we both learned a great deal from the pairing scheme. I’m extremely grateful to the Royal Society for providing this unique opportunity.”

The Royal Society’s MP-Scientist pairing scheme aims to build bridges between parliamentarians and some of the best scientists in the UK. It is an opportunity for MPs to become better informed about science issues and for scientists to understand how they can influence science policy. Over 200 pairs of scientists and MPs have taken part in the scheme since it was launched in 2001.

“We set up the Royal Society’s MP Scientist pairing scheme in 2001 to provide the opportunity for MPs and scientists to build long-term relationships with each other and have now organised over two hundred pairings.

I know many parliamentarians and scientists who have gained from the scheme, and the shaping of public policy can only improve over time as these relationships continue to grow.”