CURRENCY IS ABOUT OUR MORTGAGES, SAVINGS, JOBS, BUSINESSES AND SECURITY

I have been passionate about politics and how it can change people’s lives since I was at High School.

I have friends from all political parties and none but the art of politics for me, and them, has always been about fundamental values and the winning of an argument.• We all care about what we believe in and we often just have to agree to disagree and move on.

That is why the currency fudge by Alex Salmond is, at best, frustrating, and at worst, a deceit.• He is refusing to engage with the real issues of the currency and the subsequent consequences to the economy of Scotland if we separate from the rest of the UK.• It is a complicated issue but for the First Minister to dismiss it as a minor issue and say that we “should move on”, he is failing to•protect the everyday lives of ordinary Scots all over the country.

There are a number of reasons why Scots should not accept the “it’ll be alright on the night” mantra of the Alex Salmond.

Secondly, Alex Salmond is a recent convert to the Pound.• He is well known for saying that the Pound was a “millstone around the neck of Scotland” when he preferred the Euro.• Now given he was a former RBS economist, you would have thought he would be slightly more cautious about throwing his weight behind the Euro at that time.• The concern here is that he is willing to merely alter his currency plans for political purposes and not for pragmatic reasons.• In any case, why has the Euro not worked out as well as was expected when it launched in 2000? Due to the fact that there is not a proper currency union between all the nations involved to restrict fluctuations in•the monetary, fiscal and spending policies of each country.• Now doesn’t that sound familiar.

Thirdly, on Monday evening Alex Salmond said he had•three Plan B’s on currency.• This is simply not good enough.• His economic advisers said last week that they could use the Pound in a sterlingisation zone without a formal currency union with the rest of the UK.• They continued that this could be a “temporary” solution but didn’t lay out what temporary would mean, what would happen afterwards and why the Scottish public would not be told the plans before they start to vote.• His second plan B is a flexible independent currency and his third plan B was a separate currency linked to sterling.• All of them are unpalatable and when the First Minister was asked live on Sky News yesterday afternoon what analysis has been done to assess the impact of these options on the Scottish economy and, in particular, the financial services industry, he replied by asking for a debate with David Cameron. 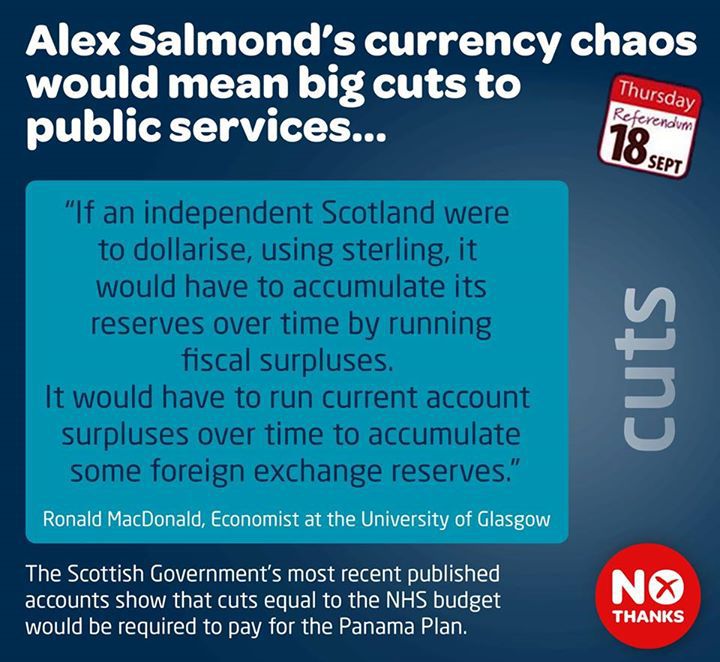 I represent a constituency that has thousands of jobs directly reliant on the financial services industry and thousands more that are indirectly affected.• It is a dereliction of duty for the First Minister to glibly cast aside legitimate questions on the impact of these flippant responses on my constituents jobs and the local economy. 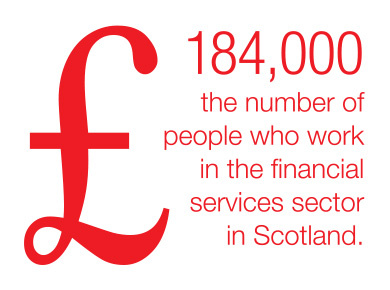 The deceit continues as the Yes camp have also continued to misinterpret what Alistair Darling said on Monday night.• They continue to repeat that he said Scotland could “use the Pound” but they fail to tell the public the rest of the same•sentence.• The full sentence is, “We could use the Pound. We could use the Ruble, we can use the Dollar.• We can use anything we want.• The point is if you’re using someone else’s currency there’s no central bank.”• That is the key.• To misrepresent this critical argument is to deceive the public into a Yes vote when it could be catastrophic for the economy and everything that underpins their livelihoods.

Fourthly, even with a currency union the consequences for Scotland are unpalatable.• In effect, the Scottish Government will spend the next 18 months dismantling everything that makes up the UK, only to have to re-establish it all to make the currency union work.• The terms and conditions of any such union would be so draconian on the Scottish Government that they would be less independent than they are now.• A foreign government would strictly set their fiscal, monetary and spending limits and ensure that the rest of the UK economy was not disadvantaged by it.• The UK Chancellor and Bank of England would set Scotland’s interest rates and that may not be in the interests of Scotland as they would have no remit to take the circumstances of the day into account.• Given the Scottish Government want a vastly divergent economy, as referenced by their 3p cut in corporation tax below that of the UK rate, then it could have significant consequences for the Scottish economy and, therefore jobs.• That is why the Euro has not worked properly as there has been a lack of proper co-ordination of economies.

Many have said this but I think it is worth repeating.• In a divorce, you share out the assets but the one thing that you never do is keep the joint bank account.

Fifthly, John Swinney, who is getting a reputation for telling the truth in private but saying the opposite in public, said categorically that if the rest of the UK deny Scotland a currency union then they would default on their responsibilities for Scotland’s share of the debt.• This is the most irresponsible thing any Government can even hint at doing.• It is right to say the international markets would trash the Scottish economy and ensure that borrowing is very expensive, if available at all.• It is a simple economic equation.• If you default on debt or are a higher risk then you pay more for any future debt and you may not even be able to borrow at all.• Every Scot will know that if you don’t pay your bills you get a bad credit rating and that, in the long run, costs you much more.• Scotland would be completely hamstrung from day one and the consequences will be•felt by ordinary Scots up and down the country with a disproportionate impact on those less well off.

Alex Salmond is so blind to delivering his lifelong ideological nationalist•goal that he will say anything, do anything and be anything to get the vote. To go from the Pound being a “millstone” and supporting the Euro, to a formal currency union that•it is not in his gift to deliver•and three Plan B’s shows that he is playing fast and loose with the future.• That’s simply not acceptable from a senior politician who told us all that he had legal advice on the EU when he had none and told us he had spoken to the Bank of England about a currency union when he has not.

The conclusion is very clear and twofold.• Firstly, we already have a successful currency union with the Pound -; it is called the United Kingdom.• Secondly, the most positive case for the benefits of the UK is the Pound.• We throw that away on a wing and a prayer at our peril.