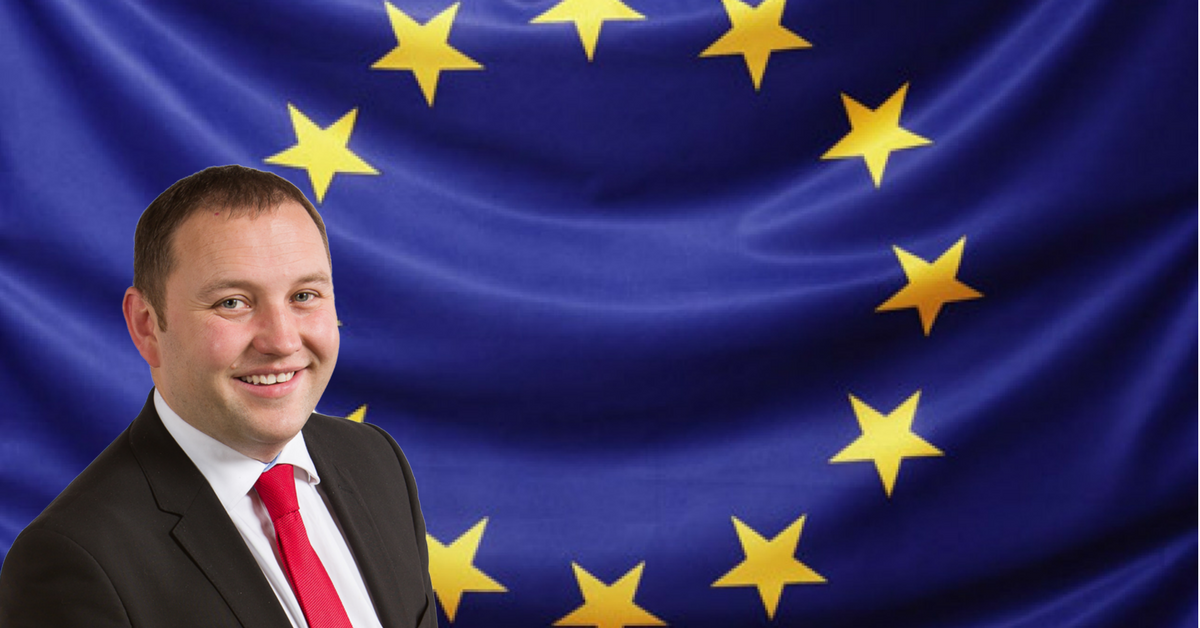 My record on Brexit:

As an MP for Edinburgh, one of the world’s great international cities, I have always had a global outlook. I am both a proud Scot and a proud European.

I campaigned tirelessly for the UK to remain in the EU and I was shocked and heartbroken by the vote to leave.

Since the referendum, I have fought Theresa May and Ruth Davidson’s Tories every step of the way as they have sought to impose a damaging “hard” Brexit.

Their vision for post-Brexit Britain is extreme and would be disastrous -; it will diminish hard won rights and protections, damage our economy, and leave us all worse off.

As your MP, I will do everything in my power to prevent that from happening. I voted against Article 50 and I will continue to resist the offer that the Government are currently pursuing.

In stark contrast to the Government plan for Brexit, I will campaign for a positive and progressive vision of our future relationship with Europe that promotes co-operation, trade and security. A vision which:

I want Scotland in the UK, with a close and productive relationship with Europe.

If you want a strong MP who is both pro-Europe and pro-UK, and who will always put Edinburgh South first.•

I compiled and distributed a public information leaflet for local residents highlighting some of the key questions for Scotland and Edinburgh in the immediate aftermath of Brexit.

I spoke with thousands of constituents during the referendum and complied a reports outlining why my constituents voted the way they did. You can see the results below: 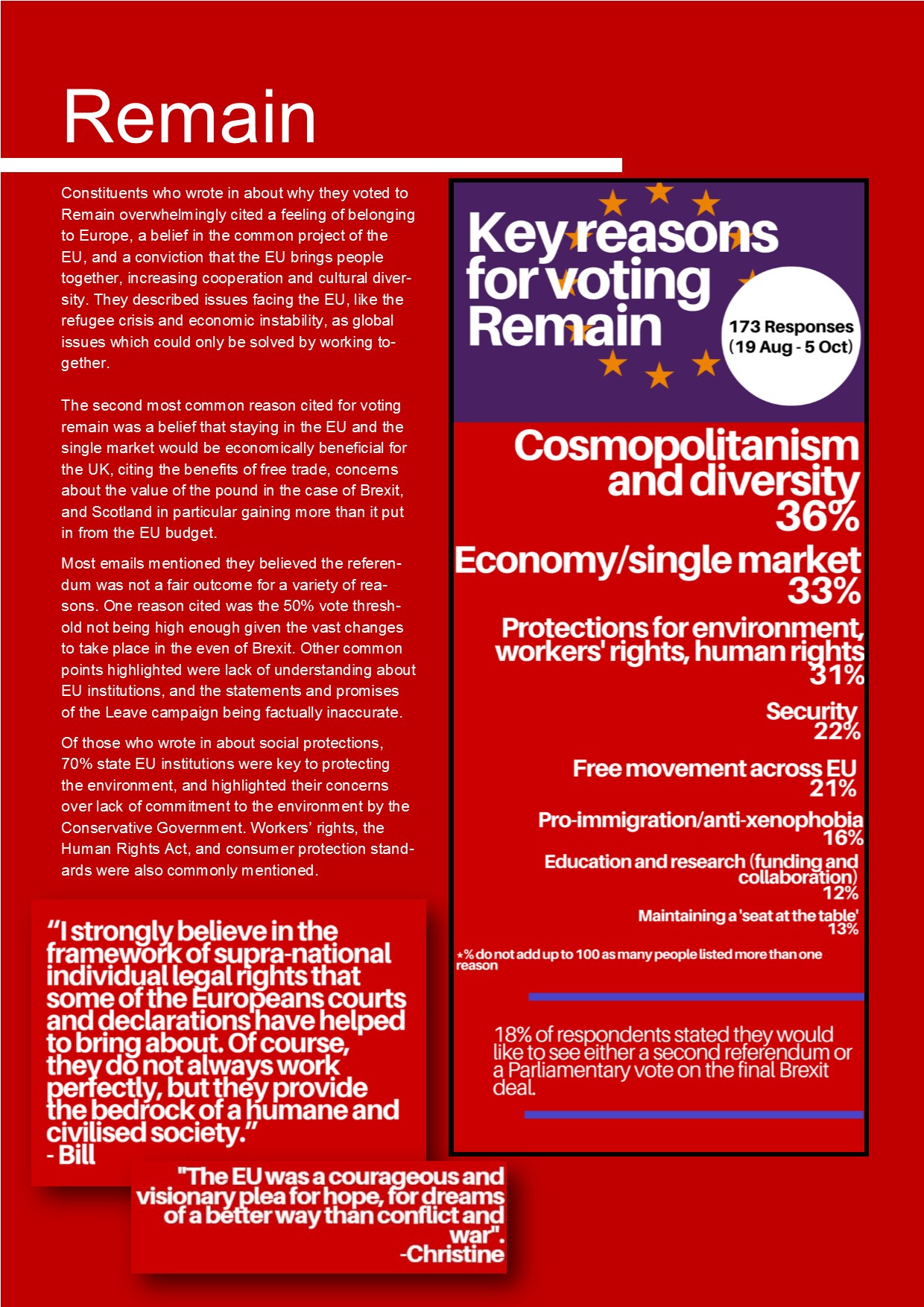 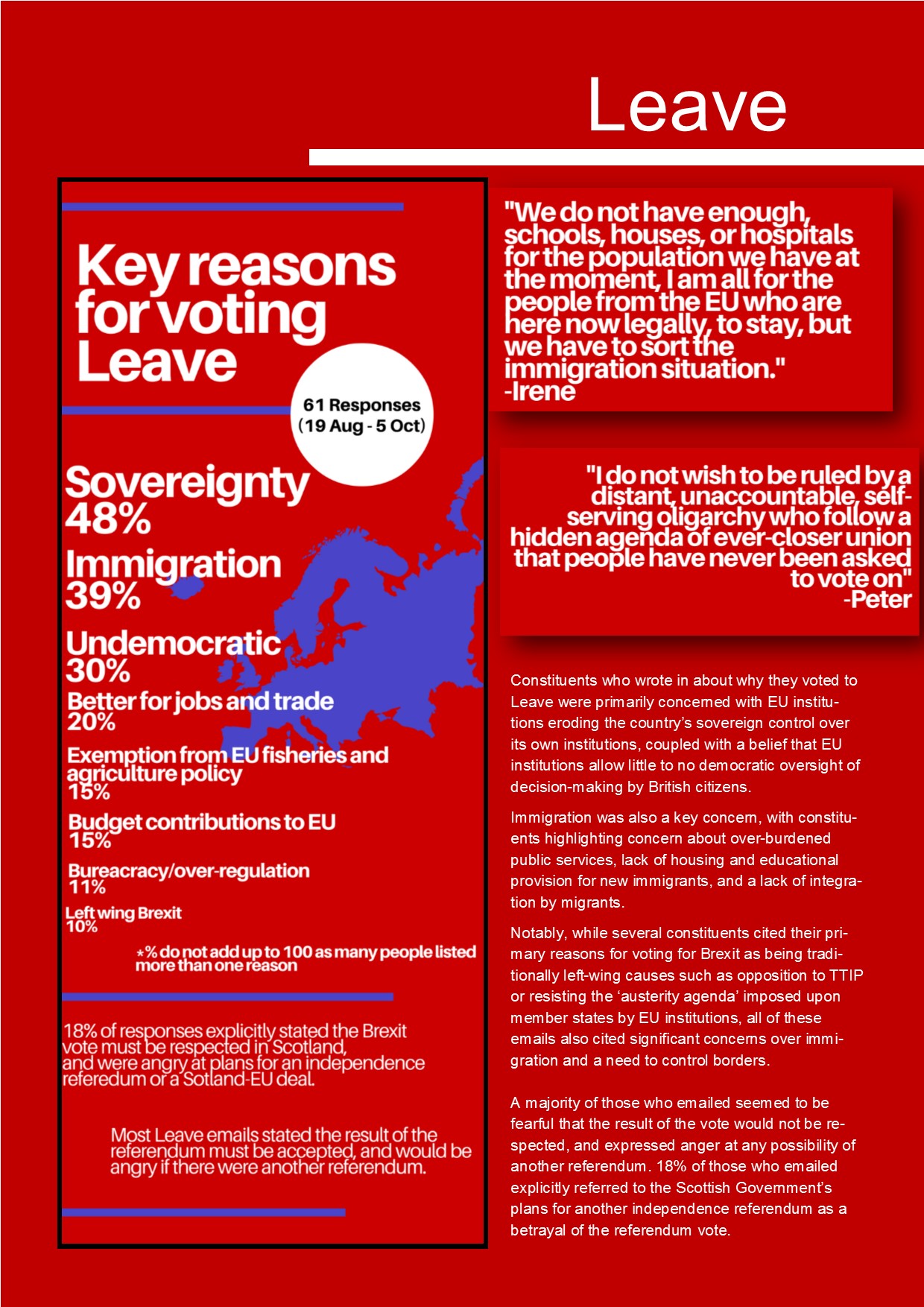 I wrote to all EU residents in Edinburgh South to show solidarity amid the uncertainty caused by Brexit and to assure them that I am on their side:

I conducted a wide reaching survey asking constituents what relationship they would like to see with the EU, post-Brexit. You can see the results below:

I organised a public meeting to allow residents of Edinburgh South to air their views on Brexit and get answers to important questions (many more were planned before the snap General Election was called):

Prior to the referendum, I gave a speech to the UK Chamber of Shipping urging all politicians who back the UK remaining in the EU to make the positive case ahead of the vote on 23rd June.

I gave a comprehensive speech on Brexit at the Scottish Fabians’ Brexit conference, arguing that we need a settlement that keeps the UK together but allows Scotland flexibility to maintain the important parts of our relationship with the EU, and which protects Scotland from the repealing EU laws that benefit Scottish jobs and workers:

I also delivered closing remarks at a Fabian society event on the challenges facing Scotland in light of Brexit:

I voted against the Government’s European Union (Notification of Withdrawal) Act 2017 -; which initiated the Brexit negotiation process -; due to the Government’s obstinate refusal to compromise its hard Brexit stance. Along with Labour Party colleagues, I endeavour to amend the Act to ensure -; among other things -; that:

I am vice-chair of the UK and Europe All Party Parliamentary Group which takes evidence from expert witnesses on the specific impact of Brexit on different sectors of our economy and society, recently chairing an evidence session with leading figures from the legal profession.

I have submitted numerous parliamentary questions to UK government ministers in order to extract important information on the impact of leaving of the EU on a range of different sectors -; including higher education, business, and finance -; and on the UK government’s negotiating stance and the future of EU agencies. Just some of my questions and the answers I received can be viewed here.

I have participated in many parliamentary debates on Brexit, highlighting issues of importance to people in Edinburgh South and across Scotland, and urging the UK government to temper their hard Brexit stance.

I led a Westminster Hall debate on the role of devolved government’s during the negotiations to leave the European Union, in which I set out five priorities for Scotland, including on trade and the rights of EU nationals:

I spoke in a debate on the importance of the Higher Education sector in the Brexit negotiations. I concentrated on Edinburgh University but the issues equally apply across Napier and Heriot Watt Universities and institutions across the U.K.

We must protect our world class research and development that provides the innovation, growth and opportunities for the future.

I•urged David Davis, Secretary of state for Exiting the EU, to give Parliament a say on triggering Article 50, the Government’s negotiating government’s stance, and the final deal the Government negotiates with the EU:

I pressed the Secretary of State for Scotland on what he is specifically doing to protect the financial services sector in Edinburgh and Scotland given its significant contribution to the economy. I also asked if he would stand by the Conservative Party manifesto to “say yes to the Single Market”.

I intervened in a debate on the right of EU Nationals to remain in the UK post-Brexit. In Edinburgh South, 25% of employees at Edinburgh University’s Kings Buildings facility are EU nationals. It is imperative they are allowed to stay as they make a massive economic and cultural contribution.

I have written numerous articles on the threat posed by Brexit to Edinburgh South and Scotland, explaining why I think it is so important that we retain a close and constructive relationship with the EU.

In early June 2016, prior to the referendum, I set out the reasons why we should vote to stay in the European Union:

I also wrote about the lies and misdirection employed by the leave campaign, such as their shameless assertion that leaving the EU would save £350 million a week, to be spent on the NHS:

In the immediate aftermath of the vote to leave, I advocated caution until the post-referendum landscape became clearer:

In late July 2016, I argued that the Scottish government needed a distinct plan for Brexit, along the lines of Scottish Labour’s Brexit Action Plan:

Later that month, ahead of the after the first meeting between Theresa May and the Scottish government on the Brexit negotiations, I argued that Nicola Sturgeon should put the public interest before politics by nominating members of the other political parties in the Scottish Parliament to negotiate with the UK government on behalf of Scotland (she refused):

I February 2017, I explained why I voted against the government’s Article 50 Bill, and expressed anger at the way the legislation was rammed through without appropriate debate, ignoring the reasonable amendments put forward by myself and others, which would have protected workers’ rights, maintained our access to the single market, guaranteed rights of EU citizens residents in the UK, and ensured that the powers of the Scottish Parliament are enhanced, not diminished:••

Last September, I was on BBC Politics Scotland to discuss the mess the Tories are making of Brexit.

Last October, I appeared on BBC Scotland 2016 to discuss how Scotland can maintain EU benefits whilst remaining part of the UK and why the UK Government must guarantee the rights of EU nationals living here.

I also appeared on Sunday Politics Scotland to explain why the arguments for staying in the EU and the UK are the same, and why a so called ‘progressive alliance’ will not work.

I’ll continue to fight for what is in the best interest of everyone in Edinburgh South.