A HUMANITARIAN TRIP TO GAZA

Ian’s report on his recent visit to Gaza

“I approached the 5 day trip to Gaza with a certain degree of apprehension.• There is no doubt that this part of the Middle East is volatile and the Peace process has virtually disappeared.• My apprehension was not dampened by having to travel from Cairo through northern Egypt to the Rafah crossing.

Peace and justice in the Middle East can only be achieved through the implementation of international law and respect for human rights. In respect of Palestine this
means a viable two state solution that delivers justice and freedom for the Palestinian people as called for by the overwhelming international consensus and enshrined under international law and in UN resolutions.

Our delegation would be examining the situation in Gaza, the lack of Fatah-Hamas reconciliation and the peace process.

Our first attempt to cross through Rafah was thwarted by a national celebration that closed the crossing for the day.• This gave the delegation of MPs and MEPs the opportunity to spend some time in Egypt meeting with the Muslim Brotherhood (who have founded the Freedom and Justice Party and are expected to win the upcoming elections) and the Trustees Committee of the Revolution in Tahir Square.• This band of young people initiated the uprising in Egypt at great personal risk.• At both meetings they spoke of their hopes for Egypt’s future and their belief the Israel is not doing enough to try and resolve the situation with Palestine.• They also believed the Rafah crossing should be fully open.

After a stalled day we travelled by bus across the Sinai Desert.• After a 10 hour trip we had to stay overnight about an hour from Rafah as it was too dangerous to go any further in the dark. After a blighted 4 hours sleep we left to reach the Rafah Crossing. Interestingly, we saw three large trucks from Scotland that had travelled for 32 days with much needed medical supplies. They had been waiting for two days to get in. We later found out they were refused entry because of two items the Egyptian authorities were not happy with but when they agreed not to take them they simply named another two items.

The Rafah crossing is not “open”.• Only 350 Palestinians per day are allowed out to Egypt and getting back home is very difficult indeed.• There were crowds of people who had been waiting since 5am to get over the border. This border is barely “open” and given that it is the only legal entry and exit point from Palestine for the Palestinians it is pretty disgraceful.• When we arrived at the other side we were met by a welcoming party of local members of the Palestinian Legislative Council (PLC)

The PLC has bases in both Gaza and the West Bank with Hamas effectively controlling Gaza and Fatah the latter.• Both parties are currently involved in a complicated reconciliation process in order to form a united Government that can negotiate for the whole of Palestine in the International Community and with Israel.

Everyone we spoke to in Gaza had one wish -; the lifting of Israel’s blockade of Gaza which is keeping 1.5 million people under siege. UNWRA (United Nations Relief and Works Agency for Palestine Refugees) provide basic food supplies, have job creation programmes and are involved in reconstruction of 10,000 houses or shelters as well as building 100 schools. There are 300 illegal tunnels from Egypt to Gaza through which all manner of goods are transported which are not allowed through the official crossings by Israel. It is cheaper to get reconstruction materials through the tunnels. Meanwhile UNWRA can’t get access to the materials to rebuild the 50,000 homes that are needed.

The biggest travesty of the siege is that UNWRA currently provides food aid for 700,000 Gazans and they face a current funding shortage that will force it to cut all food assistance and job creation from October, if not resolved.• That will create a humanitarian disaster for Gaza and people will die of malnutrition.• It is probably the biggest threat to the people of Gaza that may result in the eruption of hostilities with Israel as the blockade is maintained. 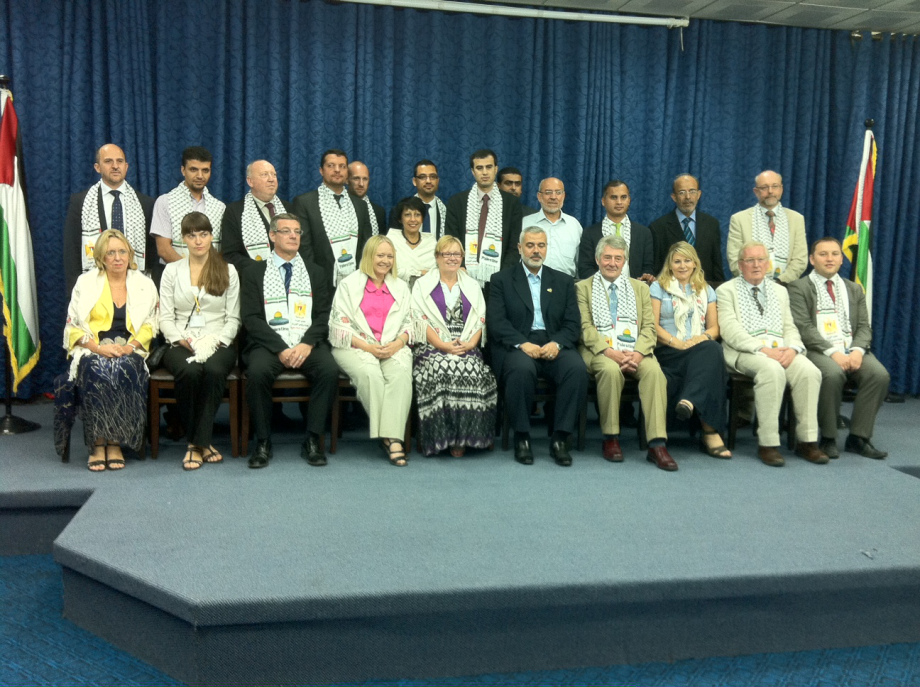 We were •able to meet with Ismail Haniyeh who is recognised as PM in Gaza, heading up the successful Hamas Parliamentary Group. He is a popular figure, living modestly and locally in Gaza. He has been pivotal in taking Hamas down a more moderate road; renouncing violence, keeping the more militant factions within Hamas under control and promoting engagement with rival Fatah.• I asked him directly what one message we could take back to the UK from the delegation and he replied without hesitation, “lift the siege, it’s killing children.”

We were also fortunate to have met with the head of the Committee for National Reconciliation, Ashraf Jumaa, who is also a Fatah member of the PLC from Rafah. Having recently returned from Istanbul, Turkey, where Fatah and Hamas held their third meeting for reconciliation, he explained that the main issues remaining included the creation of a national unity government, sharing security, the PLO structure, upcoming elections, and public civil reconciliation between the Palestinian people, not only between politicians.

Ashraf Jumaa also explained that the Fatah position is that reconciliation needs to be respected by international community; however, there is substantial pressure from the international community to keep Salam Fayyad as Prime Minister. Hamas rejects Fayyad, but does not object to postponing a national unity government until September with elections to be held in June 2012.•Ashraf Jumaa concluded: “If we can’t control the peace, then we can’t control anything.”• This seems to be the key to the future of Palestine.

The Prime Ministers wish for lifting of the siege was emphasised on a visit to the Al-Shifa Hospital in Gaza City with the Minister of Health, Bassem Naem, who revealed a large power supply deficiency that affects kidney dialysis machines where, for example, every time the power goes down, the machines have to be unplugged from patients, the blood cleaned and then restarting. There is also a severe lack of funding, lack of training due to lack of travel, a lack of spare parts and of specialists.• The Minister emotionally told us of how children with cancer cannot be treated through lack of basic medicines.• Many of which were sitting in Scottish trucks at the Rafah crossing waiting to gain access.

Additionally, Gaza City has one of the most technologically advanced radiology units in the Middle East but it lies dormant• due to “Israel’s preoccupation with ‘dual-use’ material” that could be used potentially for civilian and military purposes prohibits the import of any radio-therapy drugs for cancer patients.•• Israel also demands that patients requiring emergency treatment outside of Gaza, being transported to East Jerusalem, inform on the security situation with the Strip before receiving treatment.• 500 Palestinians have died in the last 3 years simply because of a lack of medication -; children and cancer patients are most at risk.

The economy of Palestine and, in particular, Gaza is appalling. We met with small and medium enterprises (SME) who told us that that unemployment has reached 50% of Gazans, of 2,800 factories about half do not function due to destruction.•• Before the 2008-09 Gaza War, there were 135,000 SME workers, now there are only 15.000 employed.• Furthermore, over 100,000 Gazan workers used to work in Israel and that has now stopped.• The lack of opportunity for young men, in particular, is a danger to future piece in the region.• Of that there is no doubt.• The entire economy of Gaza relied on the 300 or so illegal tunnels that bring in goods.• Without these tunnels there would be no economy, no jobs, and no hope for the future.• 1.5 million people are surviving on illegal imports.• This cannot be allowed to continue. 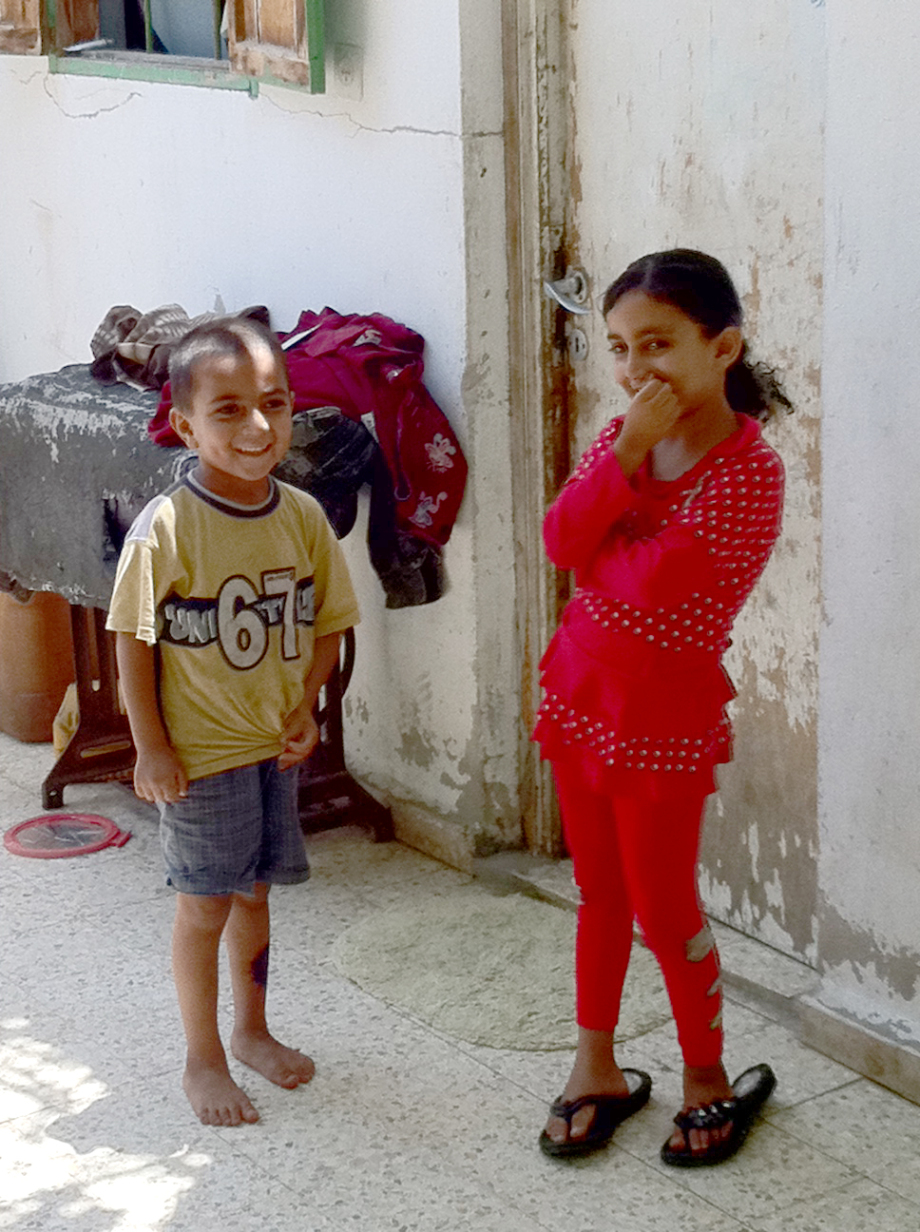 One of the most moving parts of the delegation was the visit to the refugee camp.• Men, women and children are living in unimaginable conditions.• They are frustrated by the fact that Palestine could be a burgeoning economy and life chances could be vastly improved.• I visited a shack where 14 of the same family lived.• The grandmother explained that their kitchen area was destroyed by fire as a result of shelling in the area.• Their “living” area had 4 pictures on the wall.• Each picture was a son who had been killed.• In the corner of the room were 2 klashnekoff rifles that she explained trough tears were for “protection”. They live mainly•off •UN food aid which is expected to run out in October.• It was a desperate place.• However, the people were friendly, open and resolute in their aspirations for Palestine’s future.

I took some simple sticker books with me for the kids and I’m sure the refugee camp is now peppered with stickers of Peppa Pig and Cars.

Whatever the increasingly polarised views of the Palestine/Israel situation are, what is clear is that people, and children in particular, are dying needlessly from political dogma.• There is absolutely no need for the siege and the blockade to continue.• The Rafah crossing should be fully open and Palestine should be allowed to stand on its own two feet.• We were told that the economy would recover very quickly if the siege was lifted.• It doesn’t seem to me to be too much to ask.

The full reconciliation of Fatah and Hamas is critical and elections are pivotal in 2012.• This process will allow Palestine to speak with one voice and the Peace Process must be the next priority.• The danger is that for as long as Palestine cannot get its own political house in order the Israeli have an excuse to derail any peace process.• What is inexcusable is the illegality of what is happening to Palestine.• The UN has passed resolution after resolution to stop these practices without success.•• The blockade is not only unnecessary but could become the catalyst for future conflict. People with no hope and no future end up with no choice and that is unthinkable for the future of the Middle East.”