Between the 24th and 29th of November, Tesco held their fifth Neighbourhood Food Collection in partnership with the foodbank charity The Trussell Trust, and food redistribution charity FareShare. 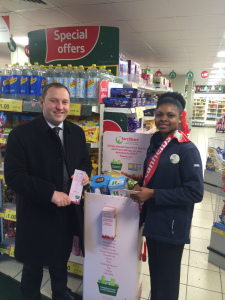 It’s a scheme where Tesco encourages shoppers to buy an extra item or two to donate to a food bank, which Tesco then adds up, and then tops this up by 30% as well as donating surplus food. I joined the staff at Tesco in Gracemount last week, which was a great insight into the programme.

Food banks provide an emergency 3-day food pack, as well as support, to those in need across the country. The Trussell Trust has 423 food banks nationwide which aim to tackle the cost of living crisis facing the people of Britain. Those who require access to food banks are identified by frontline professionals such as doctors, health visitors, Citizens Advice Bureau staff and the police. These frontline members of communities are provided with food bank vouchers that allow them to exchange these for a pack of food for three days.

In Edinburgh, from October 2013 to September 2014 nearly 11,000 people used food banks in Edinburgh, a rise of over 300%. Nationwide, this translates as 913,138 people using a food bank and being given a three day food package, 330,025 of these being children. The Trussell Trust estimates that currently there are 13 million people in the UK currently living below the poverty line and a survey of 2,178 working families conducted by Netmums in March 2014 shows that one in five working parents have had to choose between paying an essential bill or putting food on the table in the last 12 months.

The increased usage of food banks is attributed by the Trussell Trust to a variety of factors including rising food and fuel prices, static incomes, underemployment and changes to benefits. The highest contributing factor of primary referral causes is the combination of late benefits, combined with the loss of benefits which accounts for 47%.

Households and families are increasingly turning to food banks as a last resort because of the Government’s austerity measures. No one should be forced to depend on charity to put food on the table for their children.

The tremendous work of the Trussell Trust, charities and churches do fantastic work, yet their work is undermined by a government who are doing nothing to tackle the root cause of the rising use of food banks. Ministers should should scrap the Bedroom Tax and tackle poverty and low pay by enforcing the minimum wage and getting more employers to pay a living wage through tax breaks.