Last month, the controversial second Local Development Plan (LDP2) was passed by the City of Edinburgh Council. The plan will now be considered by the Scottish Government who have three months to evaluate it before deciding whether to sign it off.

For residents across South Edinburgh, this has been an incredibly frustrating process. Despite the objections of thousands of residents in our local area, the Council proceeded with its plans for hundreds of homes in the South of the city. The sites which have been proposed in South Edinburgh will encroach and build on the greenbelt. Like local residents, I wanted these sites at Broomhills, Old Station Road, Burdiehouse, The Drum, Ellens Glen, and Moredun to be exempt from the new plan.• The Broomhill site in particular received more objections than any other proposal.

Scottish planning rules require the Council to do two things: maintain a sufficient supply of land for housing, and pass a Local Development Plan (LDP) that sets out where those homes can be built. The Scottish Government set out that Edinburgh should build 32,000 new homes by 2024. I’m frustrated at the planning laws which have allowed the Scottish Government to dictate large numbers to the Council without any recognition of the impact on local amenities.• Additionally, the Scottish Government changed the initial allocation of new homes to Edinburgh from 4,400 to 7,700 at the 11th hour for the 2015-2020 plan.

It is important that Edinburgh has a coherent Local Development Plan which will shape our city in a measured way. The city cannot move forward with no plan whatsoever; indeed, that would put our green spaces at even greater risk as developers would simply be granted permission on appeal due to the lack of land allocated for housing.• We are seeing this happen already and, indeed, the development currently being built on Burdiehouse Road was as a result of an appeal granted due to a lack of housing supply policy.• We can’t afford that free for all.

However, I have been clear that there are other brownfield sites should be developed first, and that any housing on greenbelt should be resisted at all costs.

Local residents, community groups and the local community councils are rightly concerned at the impact on local amenities if these plans are adopted.• There are significant concerns on the precedent for any further development on the greenbelt, the pressure on local GP services, the significant increase at already chocked traffic junctions, and the lack of primary and high school places in the area. I set out these fears on numerous occasions in my submission of objections to the LDP2 consultation last year.

I hope that the Scottish Government’s Planner, who will consider the LDP, will recognise the pressure that will be placed on local neighbourhoods here in South Edinburgh and will make changes to the plan. It’s a ludicrous position where local people are consulted on the plan, only to have those objections completely ignored. That does nothing to restore communities’ trust in local democracy.

I have written to the former and current Scottish Government Planning Minister to lay out my concerns and received replies that the planning system was working “fine”.• I think the public have lost trust in it and that has significant consequences for both our local areas and, to be fair, the developers too.

I would like to see four reforms to the system to make it fairer:

I’ll continue to speak up for South Edinburgh and urge that the concerns of local people are heard. As I have said previously, local people have been let down due to the lack of a credible planning system. I think the Scottish Government must look urgently at whether planning law is fit for purpose. As always, I’ll continue to keep constituents updated.

Today, I received a letter from the Scottish Government recommending that the site at Gilmerton Station Road be approved for development. Developers, Mactaggart & Mickel, had appealed to the Scottish Government for planning permission to build 600-650 residential units following refusal from the Council. You can read the letter below. Once again, the local planning process is being run roughshod over. 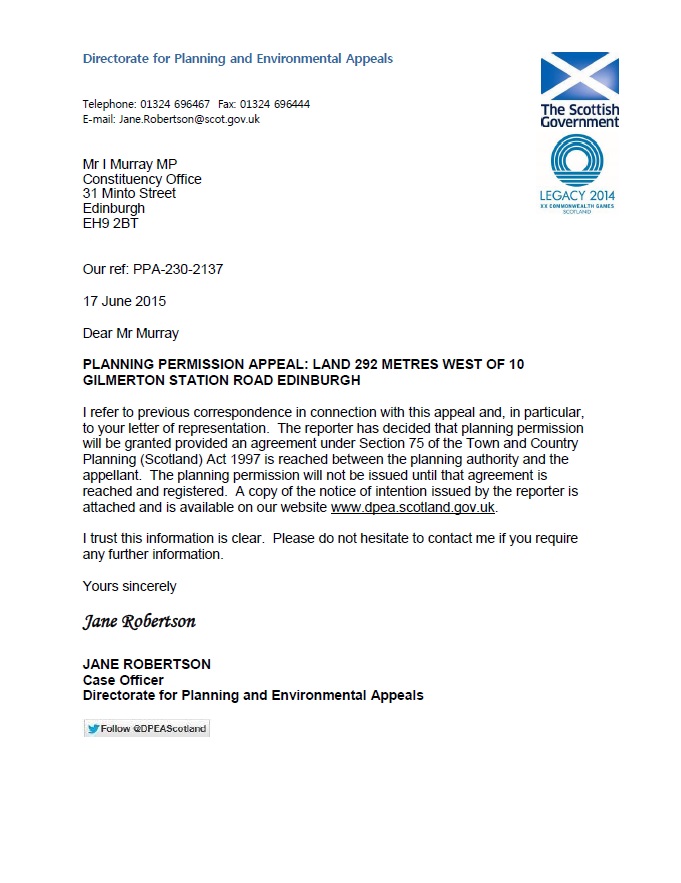