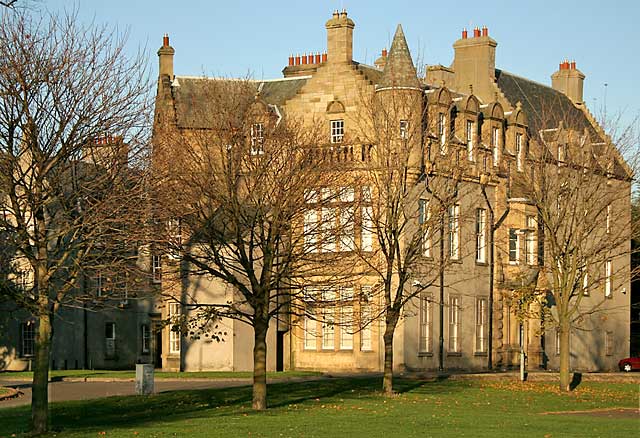 This month’s Guest blog is from Dr Margaret Collingwood and is on the history of Inch House. Margaret sits on the management committee of Inch Community Centre and is doing great work on the Save Inch House campaign.•

The name ‘Inch’ comes from the Gaelic ‘innis’ meaning an island and it was once a dry, possibly raised area within an area of wet -; a flood plain or boggy ground – White in 1792 suggested that there• may have had a drawbridge but there is no evidence at all to support this. The land, within the very large Drumselch forest, was owned by Holyrood Abbey and passed to the Forrester’s of Corstorphine who were probably the builders sometime in the 1400s or earlier of the L shaped tower from which the rest of the building originates. Vaulted chambers on the ground floor and three floors of accommodation above.• The building was built in a manner which enabled the occupants to defend it against attack but there is no evidence that it was ever under attack. At the top the turret opens onto a flat roof giving a panoramic view covering Craigmillar castle, Edinburgh castle and Liberton tower.

In 1617 a replacement spiral staircase and grand door was placed in the angle of the ‘L’ of the building. The introduction of a staircase enabled the family to have more privacy moving away from the shared living of the medieval period to one of master and servants. Further buildings would have been added as wings before or around this time (McKean 2012)

Inch was bought as part of the area of Nether Liberton by James Winram in 1607 (NAS). In 1634 he modernised a wing from the tower which had been built sometime after it and which was considered either inadequate or outdated. The building, with the initials of James Winram and his wife Jean Swinton over two of the windows and the date 1634 over the centre one, remains today.

George Winram, son of James, was a Royalist and was sent to offer Charles 2nd the throne of Scotland. He died fighting Oliver Cromwell at Dunbar in 1650. AS a result his property was seized by Cromwell and in 1660 passed to the Gilmours, the family which remained in ownership until selling the estate to Edinburgh Council in 1946.

The Gilmours made extensive renovations 1813 and again in 1834. The work done to the building at that time incorporated some of the earlier wings but is today almost completely obscured by the extensive alterations and additions carried out for Sir Robert Gilmour and his new wife Lady Susan. The work completed in 1890 and 1892 is, apart from the kitchens, the building we see today.

The main entrance had probably been moved to the opposite side of the building from that of the tower in the 1813 changes but the 1892 changes enlarged and dramatised this. The family crest above the door contains their motto ‘Nil Penna Set Usus’ -; the practice not the penmanship -; and is retained today in the badge of Liberton Primary School.

The 1634 building was generally untouched but the east wing was partly incorporated into the 1890 structure. This building is thought to have been the estate offices and servant accommodation. The architecture of this and the front wing show many varieties of architectural style which was the norm for that period of Victorian Britain. The external bell above the entrance to the east wing was for a time when the estate workers did not own watches.

The building passed to Edinburgh Council in 1946 when the surrounding land was purchased. It became a primary school for the growing local population. In 1956 most of the children moved to the new Liberton Primary School with the remainder staying as St John Vianney until they too moved to new accommodation in 1966.

You can sign the petition to save Inch House here:•http://www.ianmurraymp.co.uk/save_inch_house

Whyte T.• 1792 An Account of the Parish of Liberton in Midlothian; or County of Edinburgh.