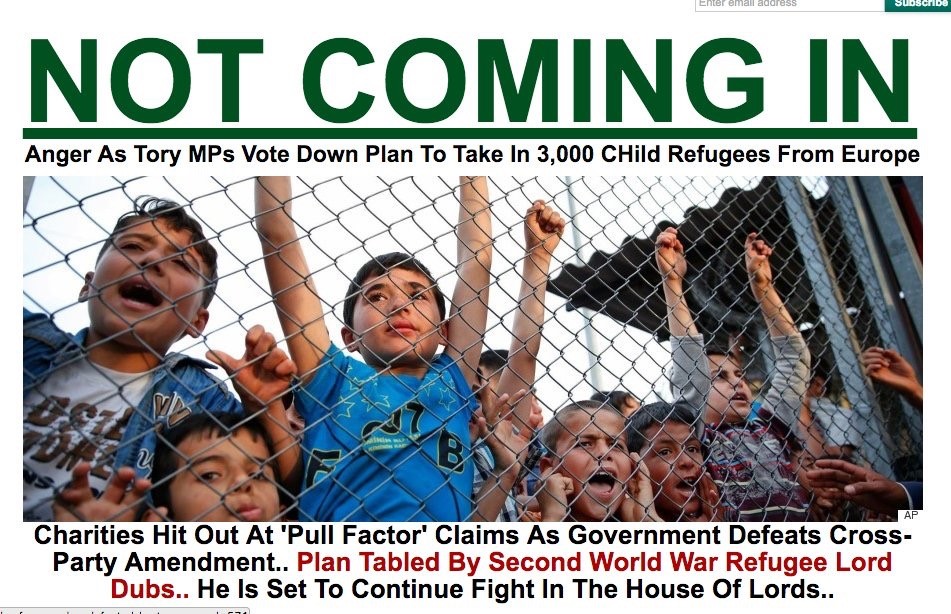 The House of Commons recently considered Lords amendments to the Immigration Bill. One of these amendments was the so-called “Dubs amendment” which would have provided sanctuary to 3,000 unaccompanied children in Europe.

Unfortunately the amendment lost by 294 to 276 votes. Cries of “shame” were heard in the chamber when it was revealed Tory MPs had callously blocked the chance for 3,000 vulnerable children to make a better life for themselves, and escape the exploitation and poverty which has engulfed them.

I would particularly recommend the contribution of my Labour colleague Yvette Cooper MP, who has relentlessly pressured the Government on this issue.

We frequently hear references to the 1930’s and Britain’s proud record in giving refugee to thousands of children from Eastern Europe, but there is no good congratulating ourselves on this if we are not prepared to act today when these children need our help. For many children the window before they become victims of trafficking, prostitution, and crime is small and the Government have got to act quickly.

The vote was a shameful night for our Parliament but all is not lost. Lord Dubs and other Labour colleagues have drafted a new amendment which passed in the House of Lords which means it will come back to the Commons- a process known as ping-pong.•Lord Dubs himself was a child refugee who fled the Nazi invasion of Czechoslovakia, and wants the unaccompanied children in Europe to have the same chance he did.•

I sincerely hope enough Conservative MPs can find a conscious and allow these children the start in life they deserve. I can assure you I will be supporting this amendment, as I did last time in the Commons.