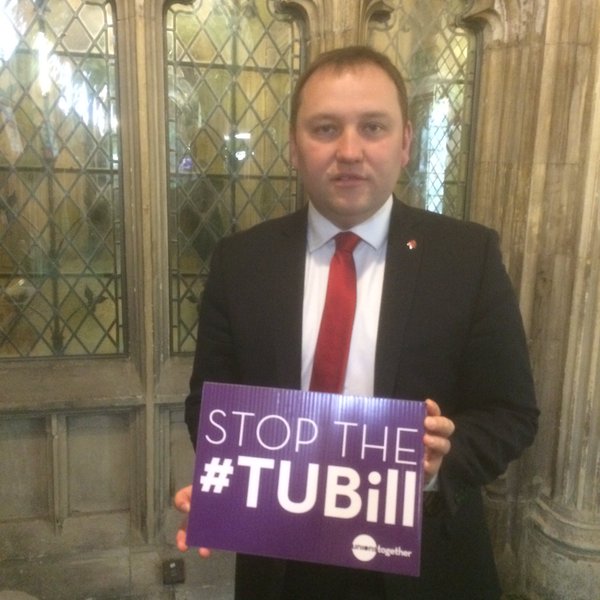 After months of campaigning by the Labour Party and trade unions the Government finally made key concessions on the Trade Union Bill.•

Initially the Government had planned to change the way trade unionists paid into their union political fund. They wanted union members to “opt in” every five years to remain in the political fund and gave unions just three months to sign up their members. It was a blatant attack on the ability of unions to campaign for their members and a partisan attack on the Labour Party’s funding and therefore our ability to hold the Government to account. The Government have now agreed to delay changes to political funding and have given trade unions 12 months rather than three to engage with new members and most importantly, current members will be exempt from the changes. This is a welcome move, and an important victory as rushing through the changes to political funds would have had serious knock-on effects for trade unions’ capacity to campaign.

After refusing to introduce e-balloting the Government again conceded and agreed to a trial of e-voting for strike ballots. This will allow trade unions to bring balloting into the twenty-first century and help towards boosting turnout and participation. These are not the only issues that we have forced a climb down on. Last week saw the Government back down over plans to end the right of workers to pay union subscriptions by deducting them from their wages.

Trade unions are an important part of an open, democratic society. I am very concerned, therefore, that the Government’s Bill seeks simply to weaken trade unions rather than to work with them in order to help boost economic efficiency and tackle Britain’s major economic challenges including our worrying productivity gap and skills shortages.

As an MP who received the support at the General Election of almost all major trade unions, I’m aware of the great work they do. •

While I welcome these concessions I, and my party, strongly oppose this Bill because it undermines the basic protections that trade unions provide for people at work. We have led the fight against it and will continue to do so. It is unnecessary, bad for workers and bad for businesses.