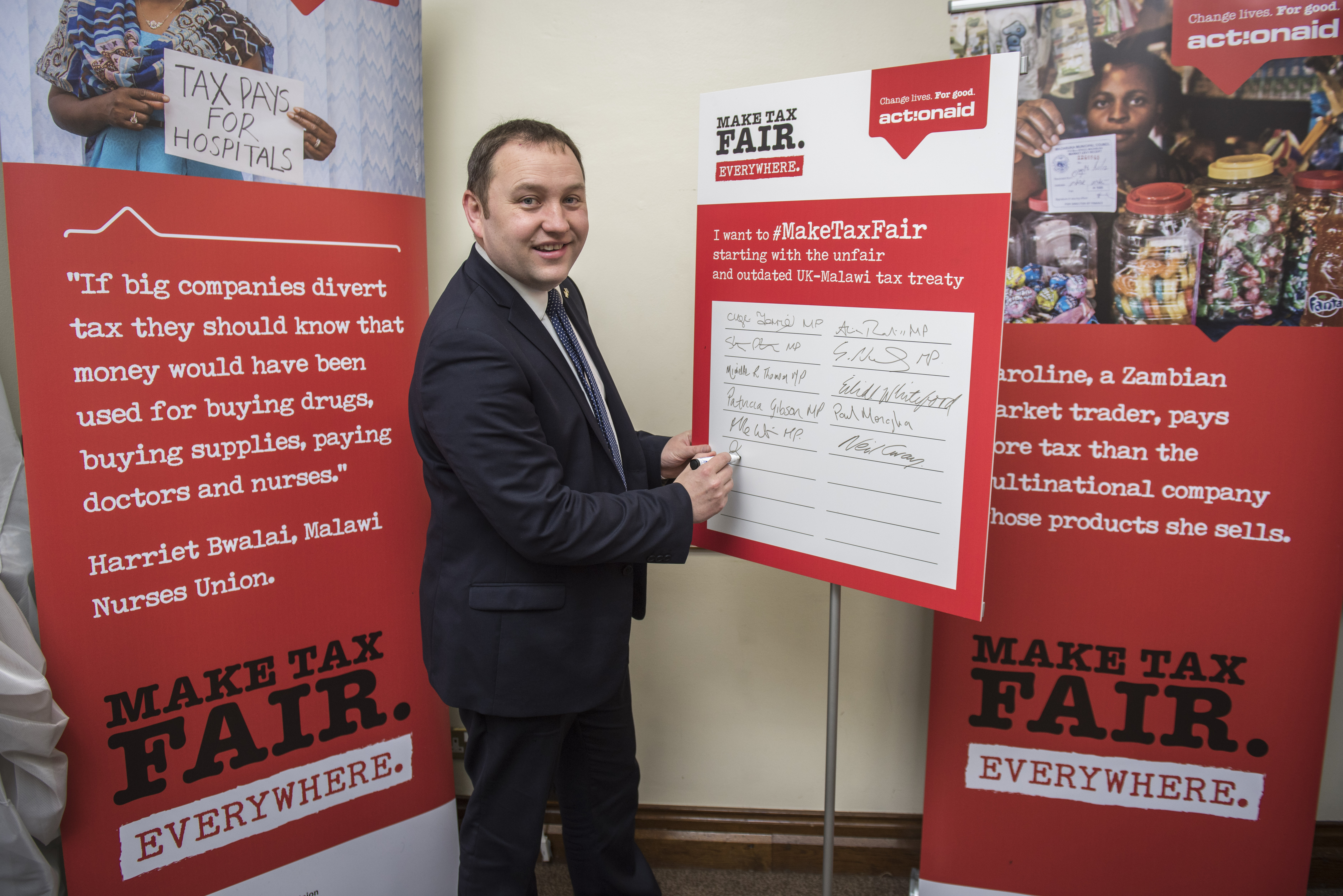 Two months ago it was pretty hard to get people excited about the technicalities around tax justice.• And then came the Panama Papers, laying bare a system which makes it all too easy for the most wealthy to hide assets and dodge tax.•

But many months before the Panama Papers appeared, the Scotland Malawi Partnership and ActionAid began a campaign together on a quite separate issue of tax justice: a call to have the colonial-era UK-Malawi bilateral tax treaty updated.•

The treaty, which sets out how money moving between the two countries is taxed, was originally signed in 1955 while Malawi (then Nyasaland) was under UK colonial rule. •It was agreed between the UK Government and the UK Government’s appointed Governor of Nyasaland. •Amazingly, it has only been minimally revised in the last 60 years, despite Malawi having become a fully independent nation more than 50 years ago.

ActionAid’s research shows that the way the UK-Malawi tax treaty allocates taxing rights unfairly favours the UK and limits the ability of the Government of Malawi to tax UK firms operating there.

Scotland has been helping lead the campaign to have this treaty updated because of its long-standing friendship with Malawi, dating back more than 150 years to the travels of Dr David Livingstone.•• The University of Edinburgh estimates that today more than 94,000 Scots and 145,000 Malawians are involved in civic partnerships together each year.• Separate research in 2014 suggests some 46% of Scots can name a friend or family member involved in a Malawi partnership.•

In this spirit of dignified partnership, Scots have long been outspoken in supporting their friends in Malawi.• In the late 1880s a massive, popular campaign in Scotland persuaded the British Government to rethink its initial unwillingness to become involved in the area. In the 1950s, when the racist Federation of Rhodesia and Nyasaland was imposed on Malawi, Scots stood shoulder-to-shoulder with Malawians in resisting it, until finally the Federation was dismantled and Malawi became an independent country in 1964. More recently, in the 1990s, Scots offered significant solidarity as Malawi threw off the shackles of its one-party system and became a multi-party democracy.

Continuing this history of partnership, Ian Murray MP has been an active and prominent supporter of the campaign to have the UK-Malawi tax treaty updated.• He does so representing the dozens of organisations in his Edinburgh South constituency which have active links with Malawi, including: Bruntsfield Primary School; South Morningside Primary School; Gilmerton Primary School; NGOs like Chance for Change, ScotMal Oral Health Aid and 500 Miles; and the Royal College of Nursing.

Ian Murray MP has also been active in helping build cross-party support for the campaign, with every Scottish MP now involved in some way.

In part as a result, the UK Government has now formally committed to updating the Malawi tax treaty and is actively working with the Government of Malawi to this end.• The Scotland Malawi Partnership and ActionAid applaud both governments for this and we look forward to seeing the detail.

Scotland can be rightly proud that all its elective representatives at Westminster are keen to support the continuing friendship with Malawi, not just through aid but also by ensuring the trade between our two nations is structured in such a way as to help our friends in Malawi work themselves out of poverty.• ••We are hugely grateful to Ian Murray MP and all Scotland’s MPs for their support.