The WASPI campaign and why it matters 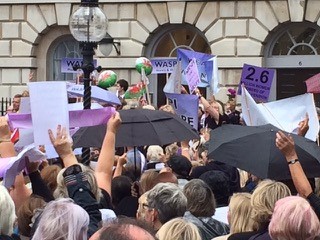 A fantastic blog by constituent and WASPI campaigner Gina Headden:

On the 29th•June 2016, about 2500 men and women from all over the UK attended a ‘WASPI’ -; Women Against State Pension Inequality -; demonstration on College Green, outside the Houses of Parliament in London.• I was one of them.

Since then I’ve marched in Glasgow and rallied with others outside the Scottish Parliament to raise awareness of the WASPI Campaign.

So, why is this Campaign important and why might you want to get involved?

In 1995 and 2011, legislation was passed making changes to the State Pension Age (SPA) in the UK.• This was done to equalise the age at which men and women become pensioners.• Almost everyone agrees that this should happen.• But how the changes are being implemented •- with little or no notice being given to those directly affected by those changes and with scant regard for real equality is, rightly, being challenged.

Inadequate notice given to those directly affected by the changes

The UK Government has said that those affected by changes to SPA should receive 10 years notice of such alterations; the Turner Commission suggested 15 years was appropriate and Saga recommended a notification period of at least 10 years.•

Like many others, the official communication I received of how the new laws will affect me fell well short of any of these recommendations: a mere 3.5 years notice of a rise in my SPA from 60 to 66.• Not nearly enough time to alter my plans in any significant way, particularly as 12 months later, and not for the first time, I found myself facing a period of redundancy. ••I’m far from alone in this situation.

Surely, when such significant financial changes are to be made, the least any of those affected by the changes should expect is timely, direct and clear communication on the matter?

In recent years, I’ve asked for and received state pension forecasts and the accompanying booklets ‘explaining’ everything about them. For the past three years, these have all been different and lacked clarity.• This appears to be a system failure. ••Indeed, Baroness Altmann, a former Pensions Minister, recently tweeted that she had seen a lot of erroneous information at the DWP, including some indicating that women’s SPA in 2016 was 60! •In short, such official communication as has happened, has been ineffectual and often misleading. 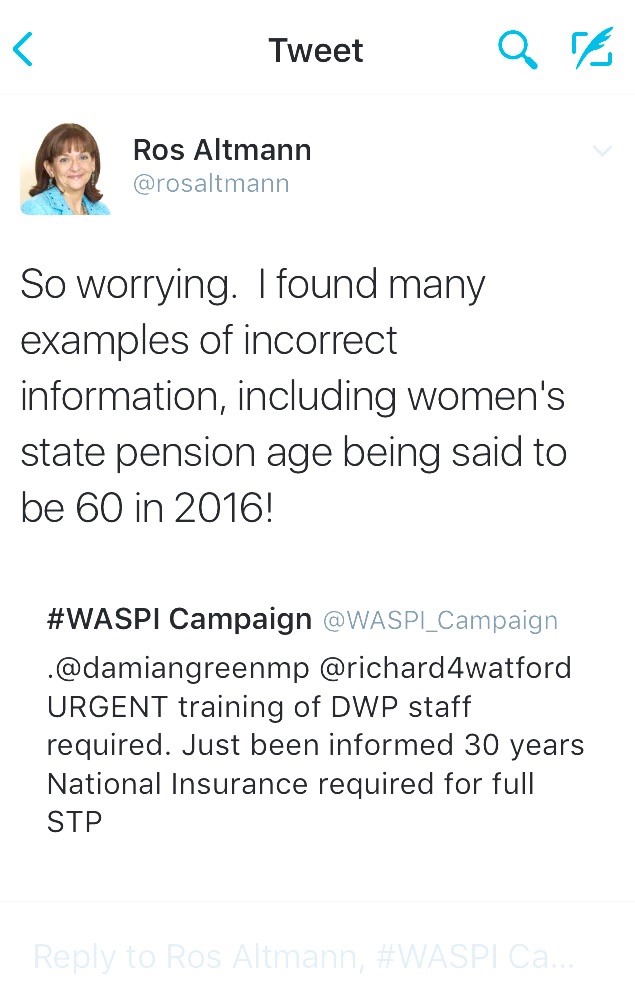 Although not the only people affected by these changes, 1950s women are bearing the brunt of them.• These women have been disadvantaged and discriminated against historically where pensions -; and finances – are concerned.• The expectation has been that they will benefit from the investments and pensions of their husbands (if they have them!) – such expectation being based on assumptions about family structure which no longer hold true – a fact acknowledged in the following quote from A New Pension Settlement for the Twenty-First Century: The Second Report of the Pensions Commission chaired by Adair Turner:•

An effective pension system for the future must be one in which the vast majority of women accrue pension entitlements, both state and private, in their own right. •(p40)

This cannot happen retrospectively for 1950s women who have had to deal with inequalities regarding pay, many aspects of pension provision, and caring commitments throughout their working lives e.g. many women who worked part-time, particularly while raising children, were, for years, prevented from paying into workplace pension schemes.• Moreover, it seems that many women have had divorce and separation agreements based on a retirement age of 60 -; some legal counsel apparently being unaware that women’s retirement age was changing.

SPA change implementation is bringing financial challenges, hardship and, in a good many cases, poverty, to the lives of 1950s women, who are affected not just by historic discrimination and inadequate notification but also by life circumstances such as divorce, ill-health, caring responsibilities, redundancy and an overcrowded job market.

The WASPI Campaign -; justice for all 1950s women

The WASPI Campaign is trying to achieve fair transitional state pension arrangements for ALL affected 1950s women.• It’s seeking a ‘bridging pension’ for those women; the amount of this bridging pension is likely to depend on on-going and future negotiations.

Like the WASPI Campaign, I believe that we should be seeking compensation for all those affected, thereby ensuring that no-one loses out on what could be expected to be rightfully theirs.• This is particularly significant for those facing the worst hardship as a result of the SPA change implementation.

Some measures being considered by groups other than the official WASPI Campaign include an option which might offer affected women an earlier state pension payment at a reduced rate for life. •While this may be acceptable to some, I suggest that for the poorest women it represents a poverty trap, one which might leave them in a worse financial position than not receiving their pension until their newly allotted SPA.•

Additionally, some have suggested that the 2011 Act alone should be overturned but this suggestion misses the point since it fails to address one of the main WASPI concerns -; namely that inadequate or no notice of SPA changes was given to 1950s women affected by the 1995 Act. •Repealing the 2011 Act alone would still leave many WASPI women facing poverty and hardship brought about by the 1995 changes and the administration associated with them.

What has been, and is being, inflicted upon 1950s women caught up in the State Pension Age changes and their implementation, seems to me nothing short of unjust and fundamentally wrong.

After more than a year of protesting peacefully and making the WASPI case known to many of the wider public, to our MPs, our MSPs and our councillors, the WASPI Campaign has had it made clear to it that the government does not intend to revisit its position on the matter.•

Given this, the Campaign has announced that it intends to explore the options for one or more legal challenges regarding the situation 1950s women are in as a result of the way the SPA changes have been enacted and administered.• To finance this, a crowdfunding appeal has been launched.• You can find information on this appeal and the potential legal challenges here:

In a little over 24 hours, this appeal raised its first target of £50,000. •At the time of writing, the amount raised stands at over £91,000 -; an impressive commitment to the campaign by its supporters. •If you’d like to contribute to this fund once you’ve considered the facts for yourself, please go to the site where you can also see how many days you have left to pledge your donation.

To find out more about how the WASPI Campaign affects not just 1950s women but ‘each and every person who has yet to retire in this country’ please follow this link:

If you think this situation needs to be addressed, you can act now:

1••••••• Read the information on the WASPI Campaign given in the links throughout this article -; and elsewhere – and make up your own mind on the validity of the Campaign and its aims.

2••••••• Speak to those affected and already involved in the Campaign.•

3••••••• If appropriate, visit your MP, tell them your story and ask for their support.

5••••••• And if you live outside Edinburgh, find your nearest group as listed on the WASPI Campaign website, (see the foot of the ‘Action’ page):

Successive governments knew -; and this one knows – that 1950s women have been subjected to a lifetime of financial, pension and other inequality. Yet:•

If you’d like to find out more, the links below provide a starting point.• I hope you find them useful.

Twitter account:••••••••• @WASPI_Campaign
A New Pension Settlement for the Twenty-First Century: The Second Report of the Pensions Commission chaired by Adair Turner: http://webarchive.nationalarchives.gov.uk/+/http:/www.dwp.gov.uk/publications/dwp/2005/pensionscommreport/main-report.pdf